The Best Remedy for Hemorrhagic Ovarian Cyst.
by

About the Author: the writer has been practicing in homoeopathy for more than twenty years and at present; he is busy in tackling very serious cases those are, either being referred to the big and costly hospitals of the capital or set aside declaring them incurable. Many a case of uterine fibroid and other growths, malignant or benign have been cured with homoeopathic remedies. The writer claims that homoeopathic medicines may decidedly cure even the cancerous growths until the biopsy has been done. In his own views, the biopsy is never favourable to the patient because it is not a treatment, but merely a check-up against malignancy whether it exists in the particular part or not. In contrary, biopsy may, sometimes, become much harmful to the patient, when the infection that creates malignancy gets a way to come out of its limited area and spreads out through blood stream into other parts of the body. According to the writer so many patients are still alive and living a normal life, whom he suggested not to go for biopsy before he treated them. 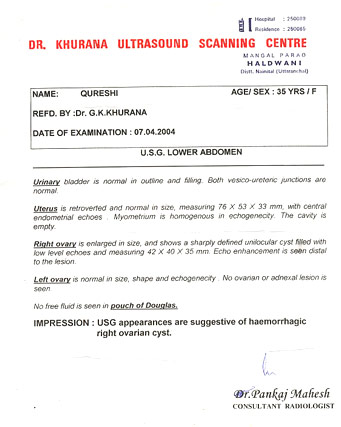 History of the Case:

Mrs. Quresha, 35, much tired of her ailment came to my clinic with her husband and told me all about the problem created in her lower abdomen where she felt, all the time, a sharp burning and stinging pain that usually extended across hypogastrium to groin and then traveled downwards. Besides it, she was suffering from smarting sensation in the urethra and a certain amount of tenesmus was present there.

She complained of a bearing down pain, particularly, while walking as though menstruation would come on or as if, the entire internal situation would move around and pass through the passage of the vagina. There was a pressure in the pelvic region upon both rectum & bladder followed with frequent and constant desire to urinate.

Concentrating the mind on her case, she was advised for ultrasonic examination then she put-up the ultrasonic examination report before me. I rebuked her why she didn’t show me that report by that time. Her husband told me about her suspicion in order that I would suggest them for the operation, because she was much afraid of being operated. 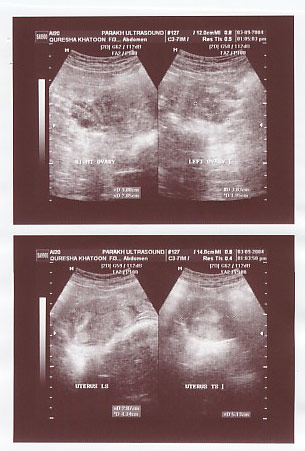 I glanced at the ultrasonic report, where the right ovary found enlarged in size having shown a sharply defined uniocular cyst filled with low-level echoes measuring 42 x 40 x 35 mm that was clearly mentioned ahead in the impression of the report as a haemorrhagic right ovarian cyst.

Family History: Although, her mother had also been suffered from uterine problems but no fibroid/cyst like that of hers she had. All her sisters, aunts & cousins (maternal), grandmother (Nani) none of them had any uterine problem like her. After making some hard efforts, I knew that her nani’s mother had, ever, been suffered from such a problem, which would have been responsible, likely, to cause her death.

Family background: She belongs to a Mohammedan family of a high status. Her husband is a government servant having 12 Acres agriculture land, so the family is well to do. They are non-vegetarian but use non-vegetarian dishes on some rare occasions. Generally, this family believes in simple living and high thinking. No one in the family intoxicates and takes even spicy dishes either. In spite of being much temperate she reached such a position was not less surprising.

They have three daughters and only son therefore, they are not anxious for next child, but Mrs. Quresha was not agree to be operated. However, the allopathic surgeons had warned her if she won’t be ready for operation, that haemorrhagic cyst might be likely to cause a serious injury. I took no much interest in her case after knowing the views of allopathic surgeons.

“Why to take the risk in vain” I said to myself, and then told her about the clear-cut decision that I had taken. She laughed at me in an immoderate way as if, she was making fun of me, and giving a challenge to my job and ability, which I couldn’t bear and stood-up straight to face her challenge rigorously. It was, of course, an open challenge not only for me but also to homoeopathy, my mother, so I had to get down into the depth of symptomatic study of the case with some serious and solid steps. Soon I got some rubrics those proved very important keynotes to me, which made my task easy and I could overcame that bloody disease.

1. Apprehensiveness, terrible disease of,
(2) Desire to have somebody with her,
(3) Low-spirited and timid, Inclined to weep,
(4) Speech mistaken, uses wrong words,
(5) Dull pain in forehead and over eyes,
(6) Appetite ravenous, sometimes loss of,
(7) Craving for meat, sour or sweet dainties,
(8) Aversion to bread and coffee,
(9)Trembling sensation in pelvis, extending down thighs,
(10) Desire to urinate frequently, smarting pain in urethra,
(11) Feeling of heavy weight & pressure in uterine region as if, whole contents would press out through vagina,
(12) Sharp and grasping pain in ovarian region that subsides by pressure of hands against vulva,
(13) Pain in the heart that aggravates by slight motion in addition; get relaxed when lying down at night,
(14) Soreness in cervical and occipital muscles passing through lower dorsal vertebrae as if, back would break, stiffness of spinal cords,
(15) Constant feeling of weight in chest at left side,

The above rubrics noted down during investigation were sufficient to select a similimum for the patient; therefore, Lilium Tigrinum in 30potency was prescribed on the alternate day. Besides Lilium Tigrinum, no other remedy was given to her. Only placebo followed Lilium. Two week after the patient (Mrs. Quresha) returned and told me how she got most of her problems subsided. No pain, no other problem, from that day forth, reached such a severity, through which she had to pass now and then. There is no need to say that the patient had a great tendency towards healing-up. In the duration of two months, she looked so nice that every one was much surprised at her active and smart behaviour. Actually, the remedy Lilium Tigrinum proved a boon that gave her a new life. 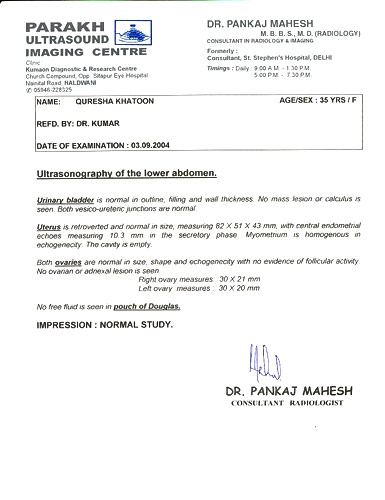 Here one thing is very important to ask wise readers/practitioners and the students that I had to give the patient some doses of Silicea 200 X once in a fortnight, because the history of her ailment was found in her family as we have already discussed about it in the chapter of Family History. Just three months after, the remedy Lilium Tigrinum was stopped and only the placebo remained continued at least for two weeks. The patient had no ill effect with out proper medicine. Thus, we passed two weeks more. In these days, six doses of Silicea 200X had been administered to the patient that paid, of course, a considerable result, no doubt. After a long-termed gap, Lilium Tig 30 was repeated twice a week only. By that time most of her problems had been terminated and she seemed happy and worriless.

Note: One may contact the patient or her guardians for confirmation of the case on the address mentioned below: